GiGi’s Playhouse, headquartered in Hoffman Estates, IL, is the only Down Syndrome Achievement Center dedicated to offering free educational, therapeutic and career-based programming for individuals with Down syndrome. There are currently 48 Playhouse locations in the US and Mexico with over 200 requests for new sites worldwide. Down Syndrome is the most significant chromosomal disease in the United States, yet it receives the least amount of funding.

Facing The Challenge Together

When COVID-19 hit, the impact on GiGi’s Playhouse was drastic. All locations were required to temporarily close, postponing the opening of the 49th Playhouse and forcing the cancellation of several fundraising events across the country. As GiGi’s Playhouse is 99% volunteer-run and relies heavily on donations to operate, without these fundraising events, the future of specific GiGi’s Playhouses hangs in the balance. The loss of even one GiGi’s location would be a devastating loss to individuals and families who rely on their free programming along with the entire community.

COVID-19 also affected one of the biggest celebrations GiGi’s planned for World Down Syndrome Day on March 21. Red Caffeine and GiGi’s had been working together for weeks to create and execute the marketing plan for this one-day celebration, which honors the triplication of the 21st chromosome - hence March 21 or 3-21.

Thinking quickly, GiGi’s and Red Caffeine pivoted to create a new World Down Syndrome Day celebration and to promote fundraising efforts at the same time!

You too, can take the 3-21 Challenge and help support GiGi’s in their valuable mission! Remember to do three acts of kindness, like calling a friend, send a letter, or pick-up groceries for a neighbor in need, then donate $21 to GiGi’s Playhouse here. Together, we can all make an impact on creating global acceptance for all! 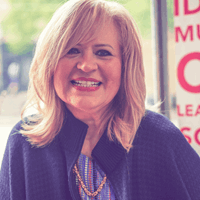